[an error occurred while processing this directive]

In Year 1 of the Age of Kronos, a ragged band of survivors who called themselves the Kindred barely averted annihilation and arrived at an island-continent inhabited by a peaceful, gentle people known as the Turanians. The natives welcomed the Toltec refugees, gave them shelter, and taught them how to raise the kinds of crops indigenous to the land so that they could survive.

In far less time than it took the Europeans to spread across that part of the North American continent that became the United States of America, the Toltec newcomers vanquished the Turanians, made them a subject race, and renamed their abode Azgard.

The conquerors were led to the island-continent by a stranger who was yet one of their own. He was a Toltec named Kronos, whom they dubbed “The Deliverer,” and revered for what they considered his supernatural powers and mythical, Divine origins.

Kronos was indeed not like most of his kind—but not for the reasons the Toltecs believed. Kronos was himself rescued from death as an infant by a Mist-Weaver and energy-master named Menadri, and brought up among the Turanians, whom Kronos loved and respected. Menadri taught energy-mastery to Kronos, giving him abilities that other Toltecs mistook as unique to Kronos.

The full story of the origins of Toltec dominance on Azgard and of the extraordinary lives of Kronos and his family will be told in the Kronos Chronicles®, a prequel to the Green Stone of Healing® series. 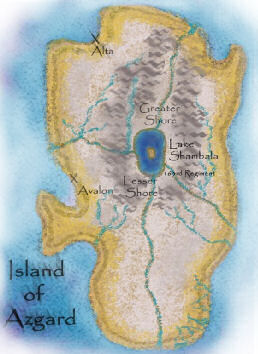 Suffice it to say that several thousand years later, by the time outlined in The Vision, the Toltecs are a fallen people. Fallen because they long ago forgot the high wisdom imparted freely to them by the Mist-Weavers. Such energy-mastery once enabled Toltec thoughtsmiths to develop and manufacture non-polluting, ever-renewing technology. Energy-mastery also at one time moved at least some of the Toltecs to acknowledge the interconnectedness of all peoples and living creatures and to strive to hold back the worst of their people’s predisposition toward violence.

Not anymore. Instead, the Toltecs have fallen because they disavowed their hearts and proclaimed the superiority of the intellect and reason. In so doing, they lost their heart-based connection to their own spirituality.

Cut off from feeling the presence of their Creator, the Toltecs devolved into an ever more warlike people, lusting for dominance and control. They stripped the Turanians of most of their wealth and all of their power and enslaved them in all but name.

Mistaking cruelty for strength, the Toltecs substituted formulaic ritual for true spiritual experience; judgment for unconditional love; ambition for honor. Their state religion was one of fear, exclusion, and control. Political power was reserved for a handful of Toltec families and ultimate authority was vested in the Exalted Lord of the Kindred, a monarch considered to be the physical and spiritual heir of the Toltecs’ God-King, Kronos.

The more wealth and power the Toltecs amassed, the less content and more empty they seemed to become.

In short, there are two Azgards at the start of The Vision. One was the world of the Toltecs, for the most part prosperous, always privileged, owning all the political power. The other world was reserved for Turanians, forever second-class, vulnerable to abuse, disenfranchised and largely impoverished, struggling to survive.

Despite the seeming hopelessness of two peoples irreconcilably divided by race and rank, one Turanian woman, Miriam Andros, has a vision of transformation and healing. She dreams of uniting the power and intellect of the Toltecs with the heart and intuitive sensibilities of the Turanians. Her means to achieve this vision is through bearing a half-breed child who would learn energy-mastery and lead both peoples to reconciliation.

She carefully chooses her child’s Toltec father. What she doesn’t count on is falling in love with him……